120 million people globally depend on mangrove forests for their livelihoods!

The fate of mangrove forests is serious. Mass destruction ws originally for rayon production in the 70's and 80's (losses over the period 1980-2005 were estimated to be > 3 million ha), and in the 1990's global losses were calculated at 1% per year, double the rate of rainforest deforestation. The main cause has now been surplanted to a large degree for aquaculture, but increasingly for rice culture (particularly in Myamar) and oil plantations. All in all, 35% of global mangrove forest has been lost since 1980. 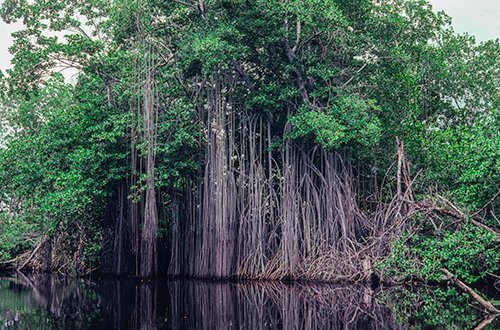 The protective shield they give coasts against tsunamis, once gone, lays coastal regions bare to the raw force of natural catastrophies. Mangrove forests are particularly important in Central America because the region is highly vulnerable to extreme weather. Coastal fisheries that support local communites, are often dependant intact mangrove forest as they are the kindergarden for reef fish.

Mangrove forests also store among the highest densities of carbon of any ecosystem globally. Most of the stored carbon is in the soil. The release of the stored carbon on climate when the mangroves are destroyed is not to be underestimated. Carbon emissions from mangrove destruction represents 10% of total emissions resulting from deforestation globally.

Mangrove communities are rich in life. "Two-faced", at low tide the fiddler crabs, mud-skippers, mud lobsters and much more frantically eat, build, burrow, fight, and mate before the water returns. As the water returns, the intertwined roots turn into a nursery for young fish, while rich communities of sponges start to feed as the rising waters bring plankton and bacteria for dinner. The ecosystem is hosts high densities of crustaceans, molluscs and many specialised insect species, snakes, amphibians, birds and mammals, the most famous of which is the Proboscis Monkey, a specialist Sonneratia mangrove eater.

The seeds of some mangrove species (e.g. Rhizophora) germinate on the tree and when heavy enough , fall down. 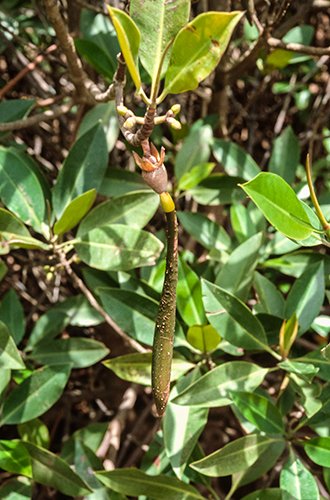 Seed geminated while still hanging on a twig of the Brugiera mangrove, North Queensland.

If the tide is out, the may spear the mud below, and if firmly embedded, they take root and grow. If the tide is high, then the seed with root will float until it comes to rest on mud or sand.

Brugiera seed left on the sand by the falling tide.

As the young mangrove grows, aerial roots stretch out from the main stem, and root in the mud. This maze of roots sets up eddies in the moving tides, and more sediment starts to settle around the young tree. As the aerial root system grows and expands, sediment accretion accelerates. 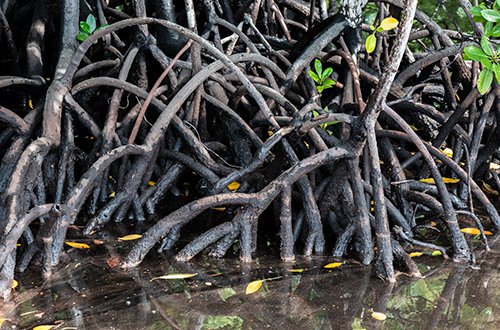 With time other mangroves settle behind the Rhizophora zone, often genera with knee roots (e.g. Bruguiera) or air roots (e.g. Avicennia). These knee and air roots route oxygen into the soil and firmly stabilise the floor of the mangrove forest. 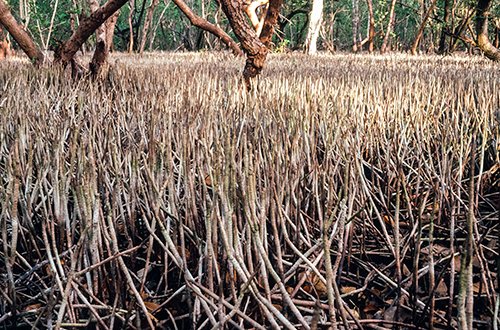 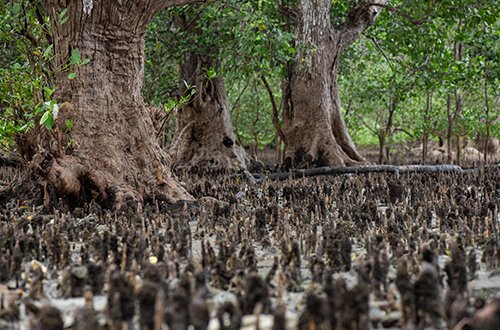 Properly maintained, mangrove forest can provide local communities firewood for fuel, molluscs and crustaceans for food as well supporting local fishing. The importance of mangroves is slowly being recognised by local communities with replanting projects achieving various levels of success in a number of countries.

By protecting mangroves, we can help protect the future of our planet.

Mangrove Governance, Conservation and Use | IUCN

Rates and drivers of mangrove deforestation in Southeast Asia, 2000–2012

Red mangrove roots above & below water 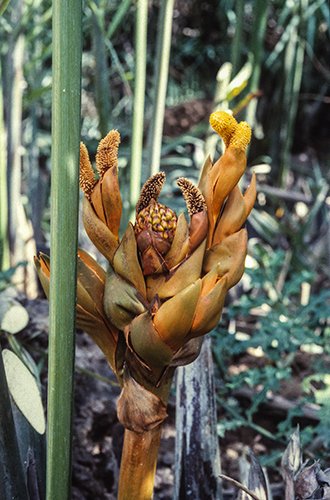 Red mangroves can establish on mud flats open to the sea.

Archer fish can live in almost fresh and in salt water. They are common in SE Asian mangrove forests.

Upwards of 50 different fiddler crabs live on the mud around mangroves.